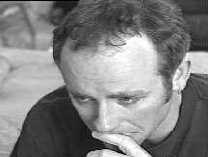 Michael George as "VID" and Susan Mansfield as "ZOLA"

THE DRIVETIME (1995, Antero Alli). If there is a story in this prolific Seattle videographer's latest feature, it's an allegory, large and loose, about the effects of technology as omnipresent mediator in all forms of communication. The film take us to Seattle circa 1999, a "virtual bureaucracy" where riots are staged, the police are performance artists, and conspiracy is currency. All control and communication is channeled through technically generated images and propaganda. Characters channel themselves through-and often smash against "the drivetime," a visual/ temporal space "where the dreamtime and the daytime overlap. ...It's like regular time with a major memory upgrade."

As concerned as Alli the writer appears to be about following a narrative trail, Alli the director has created a piece whose coherence is more atmospheric than plot-driven. In other words, through The Drivetime may set out to tell a futuristic adventure story, it soon diverges into a jumble of interlocking situations designed to illustrate a technologized state and a technologized state of being.

This jumble is extremely effective when it's just flowing; it's something like a sensory cocktail with a stinging aftertaste. But as soon as Alli tries to pour it all into a "take back tech" (re)solution, the sting is stung. After all, variations on the anti-technology theme have popped up since the Industrial Revolution, circulation in pop culture like the Ghost of Christmas Future. It's the info superhighway messenger, and not the message, that new here. In The Drivetime, Alli's eye has redefined a visually intoxicating, thematically sobering world.