In 1900, Rainer Rilke met Paula Becker in the rural artist colony of Worpswede, Germany
and immediately fell in love with her strength of personality and artistic talent. They were
both 24 years old. Though Paula was also drawn to Rilke, she was already betrothed to German
painter Otto Modersohn. They were engaged just weeks after she met Rilke who, upon discovering
their relationship, rebounded to Paula's best friend, sculptress Clara Westhoff. The two artist couples
-- self-named "The Family" for the strong artistic bonds they formed -- both married in the Spring of 1901.
The following December, the Rilkes gave birth to a daughter, Ruth Rilke. The Modersohns, however,
remained childless until late 1907. Rainer Maria Rilke found his new life as a father and family man
harshly incompatible with his artistic needs. Six months after Ruth was born, he and Clara
agreed to live apart. Clara's parents also agreed to take care of Ruth so the two of them
could pursue their art. Their little family experienced brief reunions
throughout their lives but never remained together. 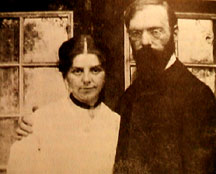 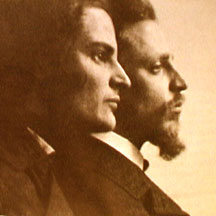 Over the next few years Rainer Rilke and Paula Modersohn-Becker corresponded in letters.
During the spring and summer of 1906 they attended numerous cultural events together in
Paris when Paula lived apart from Otto to focus exclusively on her art. At the time Paula
also had no intention of returning to Otto. During this period Paula painted numerous
works, among them her famous portrait of Rilke, a now frequent visitor to her studio.
Though Paula didn't always agree with Rilke's "Art vs. Life" arguments, both showed a
respect common between equals and "lovers in spirit". Rilke's argument was that
certain women artists were never meant to bear children but rather, to gestate
and birth the lifelong fruition of their Art. Though Paula wanted children,
she did not want them yet. She wanted to create more art first. However,
in the autumn of 1906, Otto visited Paula in Paris pleading with her to
return with him to rural Germany. During this meeting Rilke was
nowhere to be seen. After what must have been a difficult
decision, Paula joined Otto back to Worpswede, Germany.
This was also the last time Rilke would see Paula. 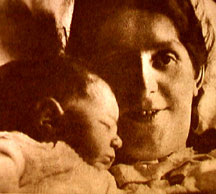 Paula and Otto conceived around her 31st birthday in February of 1907.
Nine months later on November 20th, eighteen days after the birth of their
daughter Mathilde, Paula suddenly died of post-natal complications; an embolism
in her leg erupted in thrombosis and cardiac arrest. While standing fully conscious
in her own bedroom, she spoke her final words,"what a shame", and collapsed. With
almost 600 paintings and over a thousand sketches, Paula's sudden and tragic death
came at the peak of her artistic development. At the time, Rilke was busy with a
successful European book tour and remained in denial of Paula's death until almost
a year later when he paid a visit to the Louvre in Paris. Here an 18th dynasty
Egyptian sandstone bust startled Rilke's memory of an earlier bust Clara
sculpted of Paula. The floodgates opened wide. 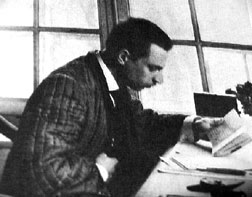 In the days and nights that followed -- October 31 through November 2, 1908 -- Rilke wrote
"Requiem For a Friend", his lyrical lament and tribute to Paula, alone in a room at the Hotel
Biron in Paris. Though his "Requiem" was published a few months later (1909), the trauma of
Paula's death haunted Rilke for most of his remaining years. Writing his "Requiem" was a
major breakthrough in his artistic process that paved the way for what many consider to
be his most significant works: "The Notebooks of Malte Laurids Brigge" (1910), "The Duino
Elegies" (1912-1922) and "The Sonnets to Orpheus" (1923). In September of 1926 Rilke was
diagnosed with advanced leukemia. In the following months his condition rapidly declined
and on December 29, 1926, Rilke passed away. He was laid to rest near the small town of
Raron Switzerland in a simple grave with a tombstone inscribed with the epitaph
he had written for himself fourteen months earlier:

Rose, oh pure contradiction, desire,
To be no one's sleep under so many Lids.

"Do not be bewildered by the surfaces;
in the depths, all becomes law."

"Requiem For a Friend"
The text in its entirety (Stephen Mitchell, translator)

"ON LOVE & OTHER DIFFICULTIES"
from "Letters to a Young Poet"

BACK TO: "THE GREATER CIRCULATION"