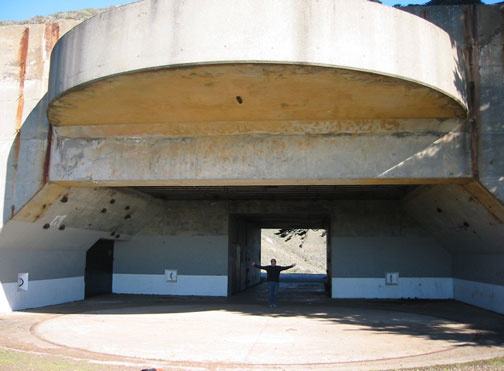 This ampitheatre-shaped building was constructed by the military in 1938 to store heavy ammunition and who knows what else. Now it is a magnificently resonant ritual space! Located in the Marin Headlands about 45 minutes drive northwest of Berkeley (the #76 CalTrans bus also goes there), this particular bunker was about a half-hour easy hike (less than a mile) from the parking lot. About fifty yards from this bunker we discovered another bunker, an awesome underground resonating chamber, where nine of us recorded our songs (from the SONG-AS-VEHICLE LAB); excerpts can be heard on the CD. There are many bunkers in this area hunkered into and on top of hilltops overlooking utterly astonishing views of the Pacific Ocean.