The following mandalas were drawn during the 3-month Alchemy Lab.
Each one"erupted" within 10-15 minutes immediately following the end of
a 2-3 hour Lab session. The only limits I imposed were: 1) each mandala
have a center and periphery and 2) to "keep it rough" by not to trying to
"create" art as much as give honest expression to the internal state we
were in at the time. Some of us brought colored markers, while others
sketched with plain ballpoint pens. I asked everyone to send me three
mandalas from the twelve or so each had completed alongside
any personal notes if they wanted. -- Antero Alli, director 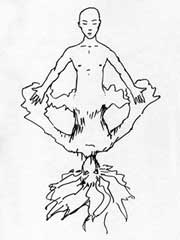 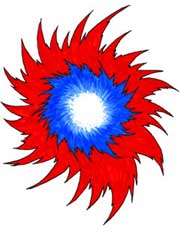 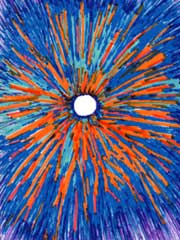 13 April 2006 (Week 4): This is the only one of my mandalas for this lab that depicts recognizable
figures rather than abstract designs. It had its genesis in the personal polarity I worked on that day:
VENUS and MARS. In my natal chart, Venus and Mars are both conjunct my Sun, one on either side.
This mandala represents the "Venus body" and the "Mars body" that I experienced in my
exploration of the polarity (the Venus body is the one on top).

20 April 2006 (Week 5): In this lab session, we explored the spectrum of colors. In the final group
ritual of the day, each of us chose two colors as sources: one as the "cloak" that informed the way
we moved through the shared space and interacted with others, and the other as the "essence"
underneath that cloak, which we checked in with privately and occasionally revealed.
It's pretty obvious what my colors were.

27 April 2006 (Week 6): In this session we worked with the polarity of THAT WHICH EXTINGUISHES ME
and THAT WHICH DISTINGUISHES ME. I came out of it with a gleefully radiant sense of the sheer joy
of BEING, and I guess that's what this mandala is a picture of. I tend to leave blank white space
at the centers of my mandalas; perhaps it represents the ineffable Mystery at the heart
of everything, or perhaps it's just no-form. 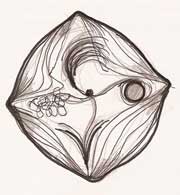 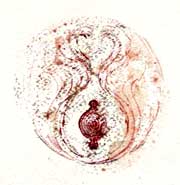 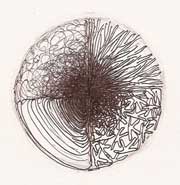 25 May 2006 - This mandala emerged after a ritual session exploring the four elements.

1 June 2006 - This was the only mandala that I drew when I was working apart from the group.
I was laid up with a back injury and chose to do my own lab at the same time that the group
was meeting. The mandala expresses what I discovered in working with
the polarity of Desire and Need. 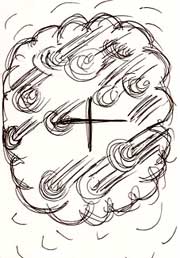 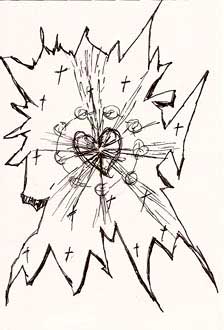 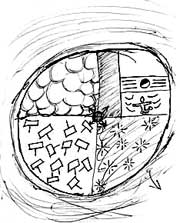 #2) The Realm of the Broken Self is a powerful ritual, especially when infused with the presence
of the God of the Heart. Born broken, sanctification of the pieces, rearrangement of the senses,
a coherence of defects, flaws and shortcomings all embraced by this matrix of self-compassion.

#3) The Four Bodies Ritual: physical, emotional, mental and spiritual. The mental body was full of
view-finders where I could see all the other bodies at once without experiencing any of them.
The ritual of the emotional body was to be fed and then, delivered to the spiritual body where
I discovered myself as space. I stepped into the physical body infusing every thing with spirit.
The feeding of the emotional body was for me revelatory and well beyond words. 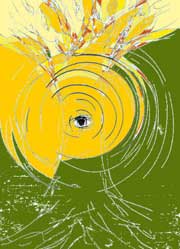 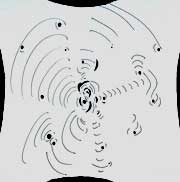 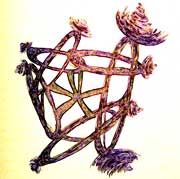 Mandala 3: My commitment to serve vertical sources ... which to me are those
of the earth and those of the great beyond above. I am reminded of the tree
of life. I commit and re-commit to my process of unfolding ... and as I do
so, my connection to source strengthens and I become a stronger tree
which may sway less in the motions of ritual and of life?

Mandala 6: That which distinguishes Jessica is charged with such a diversity
of voices! So many other me's! Oh ... who is really me? Am I but a buzzing
of fragmented identities? Am I one voice ... and all at once?
A being made of splintered me's? 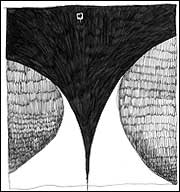 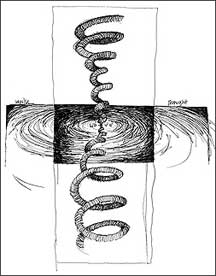 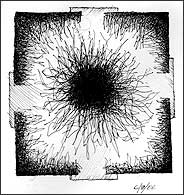 #1) Realms of the Heart Mandala: This ritual began with a path splitting in two, forcing me
into the underworld. The heart, a faint sort of hologram, floated above my head and lead
me through a magical journey that included a boat ride down the Nile.

#2) Impulse/Thought Polarity Mandala: After venturing into the extreme edges of impulse
(over-stimulation) and thought (thinking to the point of non-movement) I eventually found
a balance or center where I experienced a bliss like quality in my being.

#3) Source Mandala: Since all of my drawings were drawn after the rituals were over and
the source had faded a bit, I decided to try and bring as much source into this drawing as
was possible. I did not discharge the sources at the end of the ritual, rather invited them
into the drawing experience with me. This was drawn mostly from my opposite drawing hand
and represents the four bodily arenas of the physical, spiritual, emotional and mental. 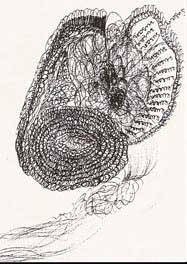 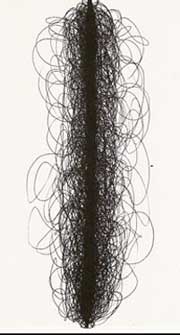 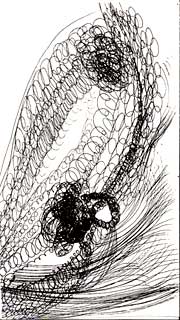