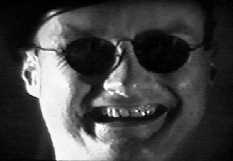 "When the daytime and the dreamtime overlap, you're in the drivetime...
where Seattle, 1999, is just another offramp."

All the weird shit which made you sweat at night--fearing terror, tear and consequence of our imminently shared millenial fold--has long since joined the annuls. People still persist, still play, still hold jobs... One of these people, Flux Adams, works as an on-call, governmedia librarian, periodically rejoining prearmageddonal time(s) to gather evidence: he lives in subjects' dreams, briefly, then fades within their world. Flux gets sent to Seattle.

To realize Seattle99, Microserfdom becomes Shadowrun: imagine a world where Terence McKenna's "singularity", Starhawk's Spiral Dance, Neal Stephenson's Snow Crash and Nostradamus' augur of our impending doom all coincide as accepted history, as narrated by Timothy Leary during a poetry slam somewhere in the Pacific Northwest while you're getting aroused by the person seated next to you. In a nuther sinse, imagine the main character from David Blair's WAX having read Neuromancer shortly after his agent advised "Dude, lose the bees..."

Poor souls strive for the best jobs available as police/performance-artists while the rest absorb CNN/UFO/CIA network broadcasts advising all to stay inside and be entertained. Meanwhile, AI-controlled virtual bureaucracies, burgeoning with GulfWar(R)-veteran lackeys, vie against "Telepathics Anonymous" fleshmeet dogmatists/subversives for control of your will and mind.

A certain acquaintance at FWR remarks in subtitle: "Drivetime, or the discovery of television among neopagans attending graduate theatre programs in the Pacific Northwest." Don't go see this to watch some entertaining video...go see this to enjoy a great play which could only be rendered as a videofilm. Epileptics beware. Plus, I have fallen in love with the Miranda character and sincerely wish to have her babies; this is an open invitation.

Top 10 Reasons To Seek: video work and effects are excellent, A++; Rob Brezsny's brilliant, provoking voice-overs leave you rolling, pondering and responding; causal wife-swapping of guns and camcorders produce a refreshing semiotic tension; Flux (Michael Douglas), Miranda (Kristen Kosmas), Vid (Michael George) perform some of the most genuine c-punk characters to screen since Bladerunner; killer sound bites to warp your psyche, e.g. Flux's show-stealing line: "I'm not a cop, I'm a librarian"; Miranda's supplicant videofaxing to mom and subsequent poetry-slam satori about military-industrial conspiracy to test faux-alien weapons on the dark side of the Moon: "They fucked her from behind...behind the Moon...the Martians...the martial artists..."

Top 10 Reasons To Cringe: editing caters to the soundtrack, which itself is a treat, but brevity would better serve many key scenes; dialog, since many characters present their performances for theatre/stage more than screen.

Antero Alli produced DT on a self-funded, $5K budget. The 88min feature (first in a trilogy series) incorporates Mike Crow's 10sep94 Capitol Hill riot footage, mosh pit scenes from Curt Cobain's funeral, and the hilarious, gratuitous, well-deserved sampling of This Island Earth. Soundtrack features World Entertainment War, Contraband, Cyndia Alli and the Menstrual Temple of the Funky Grail. You probably recognize Antero as editor of The Talking Raven and writer/director for other experimental video projects over the past six years. I can identify with him, not just 'cuz we pass for fraternal twins in visage and p'haps spirit, but through his body of work.

A recurring subtext/moral in DT, i.e. "don't consume more media than you produce," --a theme explored in text by Neal Stephenson's Snow Crash--offers maxim and formula for sanity in a pomo world. I rarely identify with c-punk movies--certainly not with high-budget Johnny Mmoronic entertainment-crime, yet sadly not with the bulk of indies-in-our-ilk, e.g. Electric Tribe (though that arguably had moments). Nonetheless, the videopoetic allegory found in DT--which aptly addresses interpersonal comm in this age of expanding telecomm--leaves me thinking, believing.

Watch for screenings on the West Coast.