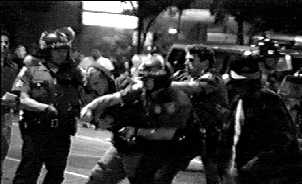 The Drivetime - It's 1999 and Seattle looks suspiciously like it does now: A world of infomercials, CD-ROMs, newsgroups, webnets, netwebs, and confused, rebel media artist trying to penetrate the hard screen and make their own meaning. Intended as the first videofilm in a trilogy, The Drivetime, directed by Antero Alli and made in Collaboration with Rob Brezsny, is am engrossing fable about possible effects of information overglut and cocooned reality withdrawal.

In 1999, "The Televisionary Terrorist Net Web" severs as part of a government-sponsered broadcast system. Instead of leaving their patrolled, ultrahigh-security living quarters, people have vicarious experiences in Drivetime an untouchable place where "daytime" and "dreamtime" intersect. "Stringers," video-record footage of police riots and street festivals to manipulate cyberspace dreams broadcast for voyeuristic pleasure. Media has reached the saturation point, or as Baudrillard would have said, "the hyper-real," where people consume more than they produce.

Others work against this techno-tranny. Zola is involved in "Telepathics Anonymous," a group for those "addicted to real connection between people in a world that is rapidly disappearing into virtual, on-line communities." Her lover, Vid, struggles spiritually with his servile stinger job.

Alli is extremely effective at portraying a technocratic world without excessive use of effects or over dramatization. The devices he uses to reveal the technological over structure - bites of commercial entertainment services, hidden rituals in the Oddfellows Temple, and people huddled alone in their rooms speaking to monitors - is emotionally evocative and probing. It's not paranoid or ultra-utopian, a constant danger with this theme. As an added bonus, The Drivetime features plenty of local musicians and performance artist (including the comic-ritualistic group, "The Menstrual Temple of the Funky Grail") that make this film even more engaging.