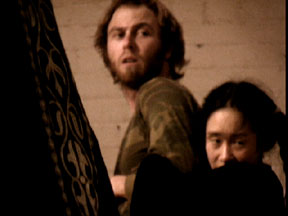 12/21. On the seventh session, the quaternity of the Four Elements (and aether) was introduced as the first major group interaction ritual in this INITIATIONS lab. I was grateful to have waited. As a whole, individuals expressed a strong show of commitment to serving their own sources before and during interaction with others, which redeemed the ritual from turning into "soup", bogged down from excessive merging of energies. Instead, the group energy had a fighting chance to really combust, evolve, die, and be reborn several times over...a true delight, a beautiful vision to behold. The previous three-week focus on asocial values -- such as No-Form, Spatial Awareness and Source Relations -- seems to have paid off. Though I don't think everybody is quite aware of this yet, the experience of No-Form continues as the core challenge in this group.

12/23. Tonight the focus shifted from group interaction to solitary exploration of the internal landscapes. The chief sources: God of the Head, God of the Heart and God of the Gut. The group as a whole showed as much commitment to surrendering to these internal sources as they had shown to interaction last Sunday. This would not be happening if the overall commitment to No-Form were also not deepening, which it seems to be. True to the spirit of Winter Solstice, an uncommon depth and stillness pervaded tonight's final ritual of Deity Approaches. Participants were more vocal in the final group circle, expressing their fears, excitements and questions with a candor unseen before this point. I reminded the group of the initiatory phase we were in, of gaining access to the internal landscape and its sources. How it looks right now is not as important as establishing a stronger commitment to serving the sources themselves. We are not looking for a "look" yet but more emotional honesty and autonomy; the "look", I trust, will emerge later on its own. 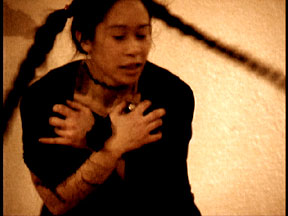 12/28. Tonight's session started in a group circle where everyone shared their name and why they were there. The group went on to earn more autonomy by undergoing the first 70 minutes of the session without any external verbal cues from myself. As a result, I got to join in the Praying Ground, Physical Warm-Up cycles and Personal Polarizations (love/fear). The rest of the night was spent exploring a trinity of human systems as sources: 1) Central Nervous System 2) Skeletal and 3) Muscular systems, first as the movement vocabulary exercise and then, as a group interaction ritual. In the final group circle, I offered each person specific attention points or directions to experiment with in the following sessions. Everyone seemed to appreciate the feedback. Several breakthroughs were also made known by Justin, Alaska, Brian, and Serene.

12/30. Tonight a new level of group unity was realized through an in-depth exploration of the trinity of Creator, Destroyer and Nourisher. The group came to this unity by virtue of each individual staying true to their own vertical source (one of the trinity) while interacting with each other and being acted on by others. As a result the group spirit underwent many cycles of transformation, rather than suddenly peaking out and dispersing. Theatrical elements emerged -- near-mythic forms and recognizable motifs -- from the primoridal chaos. I felt the group was strong enough for more challenging directions (Level Two: shadow work) and expressed as much in the final group circle. I also raised the technical point of people dwelling too long in a given source or experience and the resulting self-indulgence. I said it was up to each person to find that "point of too much dwelling" on their own. I joined in the first 90 minutes (personal polarity: art/life) thus, continuing the shift from facilitation to participation. 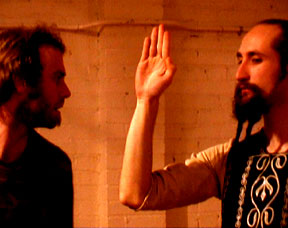 1/02/04. In the last lab session, I witnessed more mythic elements spontaneously erupting from the primordial chaos of the group rituals, leaving me with a series of vivid impressions. Since that night certain seed ideas have started to form in my consciousness involving a specific theatrical framework -- a mythos, really -- to contain and present the naked rituals of paratheatrical process as performance. I will await further fermentation before disclosing them here and to the group. Until then, I proceed with deep gratitude for the commitment and faith this group has shown in their passage through terra incognito, their rewards arriving simultaneously in the journey and its secret promise of meaningful destination...destiny? 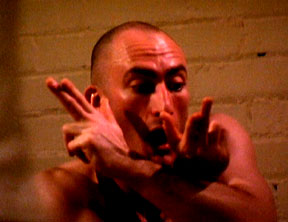 1/04/04. Tonight's session unfolded with surprising results and several breakthroughs, while also being the first time I participated in all the rituals (while verbally positing the occasional note). My personal polarity (disease/healing) served the expression of a bad cold I am just now getting over; the results are revelatory and exquisite. The group entered a strong ritual circle design evoking dynamic polarities of safety/danger and sobriety/intoxication. We witnessed what Paradox later called "some crazy shit" in the center area where individual forces of danger and intoxication mixed and mingled in combustive displays. Though not entirely No-Form induced, the ritual did act as an important release valve for underlying pressures innate to this male dominant group. The overall effect seemed to be one of creative imbalance, a tilting of the group animal towards the discovery of new responses; a kind of well-timed bump on the initiations road.

1/06/04. Right from the start, I alerted the group to a few adjustments -- No-Form techniques, really -- to experiment with towards bringing more potency to their work. This included me ringing the gong at random (and not so random) intervals throughout the night as a self-remembering device. "When you hear the gong, check in to see if you are forcing or controlling the experience or, letting an actual source move you."

Tonight the group underwent a series of immersions in the Persecutor/Savior/Victim or Martyr trinity resulting in a slew of surprises and breakthroughs for just about everyone. In the final group circle, I announced that I was going ahead with the post-Lab performance level and that more details would be forthcoming. Samuel Taylor Coleridge's Kubla Khan was mentioned as possible text and divine intoxication as context. I also reminded the group that Sylvi would be joining us next Sunday to act on the ritual environment with her sounds, tones and music. I sense that we are at a turning point that will fully articulate itself in the final four lab sessions. This feels good. 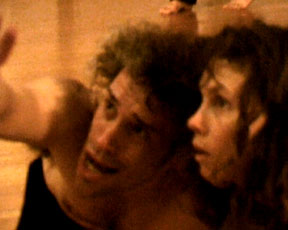 1/11/04. Full house tonight; 17 with me & Sylvi. I opted out of the warm-up, returned to silent witness mode and introduced the next level of Head, Heart and Gut as sources to inform three kinds of movement. I can tell the group unity has deepened because there are far fewer collisions out there on the floor. Seems like the group has discovered how to swarm together rather than bump into each other. Sylvi and I huddled in a far dark corner playing a variety of instruments to color the terrain of a major quaternity ritual: Being Born, Living & Maturing, Dying & Death and Afterlife or Bardo (and back to Birth, again). Our musical experiment went well, overall, and I look forward to its continuing presence. The group underwent several reincarnations of this quaternity until finally exhausting themselves. I have settled on "Orphans of Delirium" as the title for the performance ritual we will be working on after this lab.

1/13/04. Everyone present except Brian. No outside music. Throughout this sesson, we explored the vocal instrument as a resonating chamber for sources to sound through. Vocal creations. The group passed through the Head, Heart and Gut centers looking for and finding tones innate to each source. The focus turned to "not forcing the sound" but rather making the source more important than its vocal expression. This eventually allowed the sounds to emerge more on their own and with greater subtlety, power and textural variation. The Four Elements were re-introduced as sources with distinct tones, allowing the vocal creations to continue. This ritual encouraged a broadening of the group's overall vocal range and depth. In the final group circle, discussion was stimulated around the formation of language from sounds originating in nonverbal, silent sources. 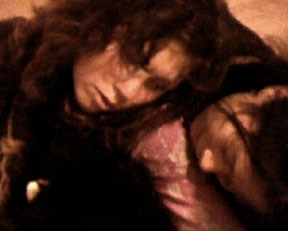 1/18/04. Everyone present. A return to initiating the session with spatial awareness instilled the Praying Ground with new vigor and focus. It seems that active relation to space consistently reinforces the asocial climate that opens access to vertical sources. A 3-part vocal process was then introduced -- source to movement to sound -- as the group moved through Head, Heart & Gut centers. Twice; once to open it up and once more to distill the expressions. The rest of this session was poured into the group polarity of Core Self & Superficial Self and, then a large spiral ritual exploring the twixt between. This rite culminated in a new depth and group unity of choral cacophany that seemed to satisfy an emerging collective need. A pleasant silence fell upon us all in the final circle.

1/20/04. Everyone present. Most of the final night commenced in darkness illuminated by a single candle lantern lit in the center of the space; the dancing shadows, the flickering light. The archetype of Dreaming pervaded all the rituals. The closing rite involved projecting the dreambody into the darkened space and entering with the intention of looking for it. If we found it, we were to embody it and let this develop into a character with sounds, words and gestures. I did not participate but witnessed in awe the dance of light and shadow, the poetics unravelling before me, the playful fluidity, mystery and lyrical power of it all.

I shared my vision of the characters and overall structure for the next stage of our journey, of preparing ourselves for "Orphans of Delirium". To cross this bridge from self-initiation to performance, I suggested replacing the word "lab" with the word "vehicle". The lab was over. Our new objective was to build a vehicle to transport us from private ritual into public performance. Looking back now, I see how this initiations lab was successful in achieving its intentions on both individual and group levels of proffering initiatic experience. I am left with feelings of gratitude for the tremendous commitment, trust and faith shown by everyone who made it happen. Now we take a ten-day break before returning to the vehicle.

OTHER LAB REPORTS
Ritual journals (since 1999)