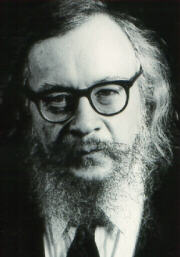 "We can see this phenomena in the categories of energy: heavy but
organic energies (linked to the forces of life, to instincts, to sensuality)
and other energies, more subtle. The question of verticality means to
pass from a so-called coarse level -- in a certain sense one could say
an “everyday level” -- to a level of energy more subtle or even
towards the higher connection". - Jerzy Grotowski

The term "paratheatre" was coined by the late Polish theatre director, Jerzy Grotowski, to address a highly dynamic and visceral performance style that aimed to erase traditional divisions between audience and performers. Paratheatre was also executed outdoors in the forests of Poland as non-performance events. After 1975, Grotowski withdrew from theatre entirely as a public performance medium to redirect his focus towards non-performance oriented group dynamics that developed through various stages: Paratheatre (1969-78), Theatre of Sources (1976-1982), Objective Drama (1983-86), and Art as Vehicle (1986-present). Grotowski's work continues today at the WORK CENTER OF JERZY GROTOWSKI AND THOMAS RICHARDS in Pontedera, Italy.

CLICK THIS FOR DETAILS ON THE STAGES OF GROTOWSKI'S WORK
Paratheatre, Theatre of Sources, Objective Drama, and Art as Vehicle 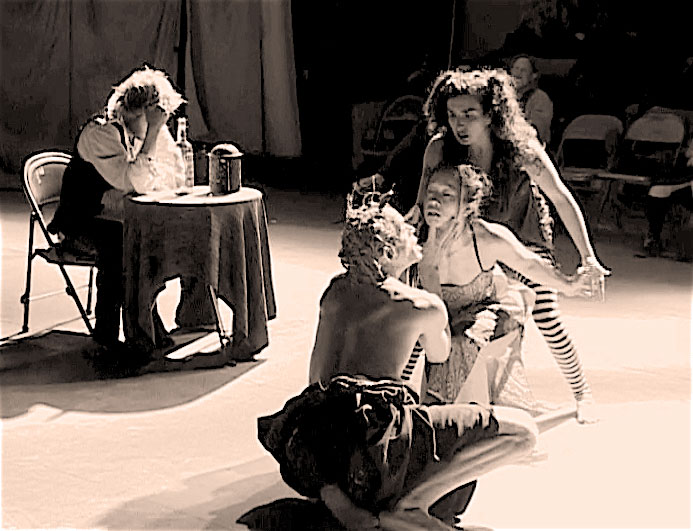 Are you doing paratheatre as defined by Grotowski?

No. ParaTheatrical ReSearch is Grotowski-inspired, not Grotowski-informed or defined. The term "paratheatre", like the term "theatre", undergoes periodic updating and redefining to serve the developing contexts of its practice and its practioners. Though inspired by Grotowski's early Paratheatre work (1969-78), this paratheatre medium neither follows or attempts to replicate his example. One important distinction separating this Paratheatre training from Grotowski's earlier work is a standing meditation we implement, "no-form".

The purpose of no-form is two-fold: 1) to deepen internal receptivity to the internal landscape of autonomous forces in the body towards their engagement and expression and 2) to discharge identification with these very forces after each engagement. The physical body, with all its hidden organs and complex interactive bio-systems, is posited as the embodiment of the Subconscious mind. No-Form practice cultivates internal receptivity to the internal landscape. Paratheatre methods are applied in a kind of excavation process for making the unconscious, conscious in a visceral embodiment of what Carl Jung calls "active imagination".

The term and principle of "No-Form" is borrowed from Buddhist Zazen practice. However, we do not approach No-Form as any spiritual path to samadhi or "enlightenment". Our No-Form practice is reframed as a tool for cultivating deep internal receptivity to the Body's innate sources of impulse, emotion, and responsiveness as somatic movement resources. We also do not practice No-Form as sitting meditation but in a physical stance of vertical rest enabling a more direct expression through movement, dance, and physical actions. We also utilize the No-Form state to disidentify with whatever forces we've expressed after each engagement to minimize ego-inflation from identitfication with any influx of Subconscious contents into the conscious mind. 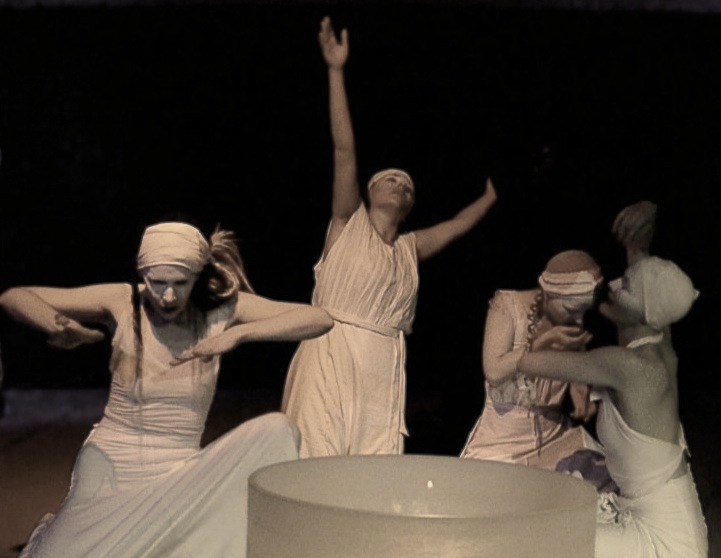 Is paratheatre the same as improvisation?
How do participants interact with each other?

Paratheatre is not the same as improvisation as commonly defined and performed in theatre and dance. Unlike improvisation, group interaction in this medium does not depend on any external cues or wanting anything from others or the audience to spark, sustain, or motivate interaction. This approach to group interaction follows an asocial directive. "Asocial" is neither antisocial nor social but a third way of relating. Neither socially hostile nor socially-conforming, an asocial approach starts with realizing our non-responsibility to others. This adjustment can frustrate unmet social needs as it supports a different purpose for being in a group than meeting social needs -- approval, support, affection, courtship, acceptance, etc. An asocial approach redirects attention inward to the Body's innate sources - of impulse, emotion, sensation, power, etc. - and their expression through movement, sound, gesture, and action. Group work in an asocial climate supports greater authenticity, creative response, and integrity of self-expression. When we are more free of social considerations, we are more free to express ourselves more truthfully. We call this approach to group interaction, asocial interplay. 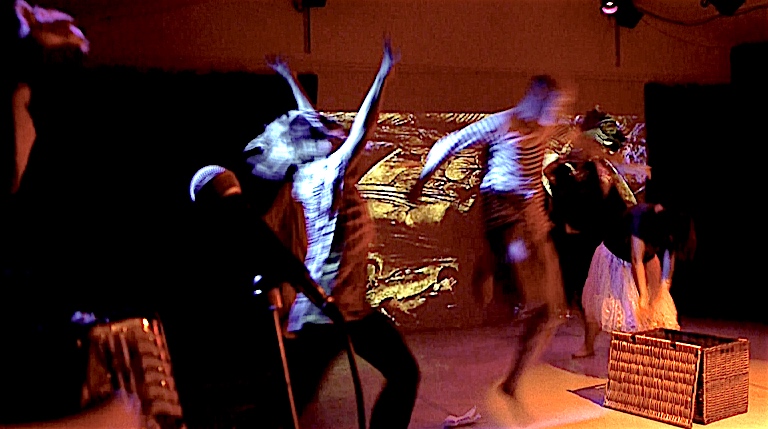 What defines this Paratheatre training process?

Defining this Paratheatre training process can be difficult due to many interactive methods and principles. There's the external, physical level of confronting "movement cliches" towards expanding movement vocabulary. No-Form practice deepens internal receptivity to the Body's impulses, tensions, and emotions. The attention is also trained to align with the Body in present time while bypassing the thinking machine by paying attention only to what is happening and what you are doing. The asocial climate also explores novel modes of interaction uncommon to everyday social discourse. Overall, this training process follows a holisitic approach to sensitizing the instrument of the self towards a more authentic, or organic, self-expression and interaction.

Paratheatre training occurs indoors in a non-verbal, non-performance setting. Without an audience to impress or to entertain or please, the external pressures to perform are relaxed and replaced by the self-created pressures of increasing our commitment to the given state, experience and actions at hand. By training in a nonverbal climate, participants discover new ways to express and communicate internal processes.

Participants are asked to make a silent vow to themselves for becoming fully accountable for their own safety and well being. By agreeing to make ourselves safe in the face of upset or overwhelm, we defuse the often unconscious parent/child dynamics; we do not wait for a "mom or dad" to make us safe. When we feel safe enough, we feel more free to take risks and commit to the moment, the state we're in, and the internal sources animating our expression. An asocial climate supports a more organic field of expression free from social constraints while exciting and sustaining a creative state.

Click this for video demonstrating our Physical Warm-up process 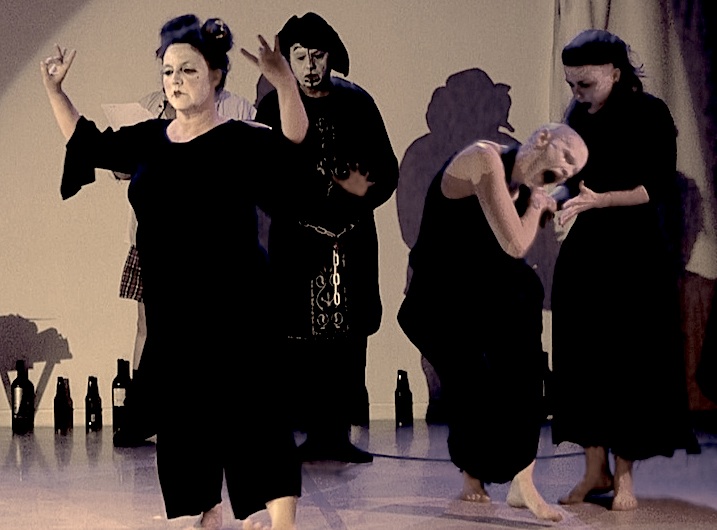 How does ParaTheatrical ReSearch present itself to the public?

ParaTheatrical ReSearch has presented itself in four public formats: 1) Talks (to discuss and explain the basic principles and methods of this medium) 2) Lecture-Demo (demonstration of work processes accompanied by explanation) 3) Performance (specific ritual infrastructures accompanied by poetic text, film, song and live music; with no explanations) and 4) Video documents (representations of performance and non-performance modes). Between 1977 and 2015, ParaTheatrical ReSearch primarily served others as a non-performance oriented group process that focused on training, without an audience or any witnesses beyond the facilitator. This long term process of mostly private, uninterrupted group work achieved its various asocial, kinetic, spiritual, and creative objectives and provided a solid foundation for the next phase of this work. 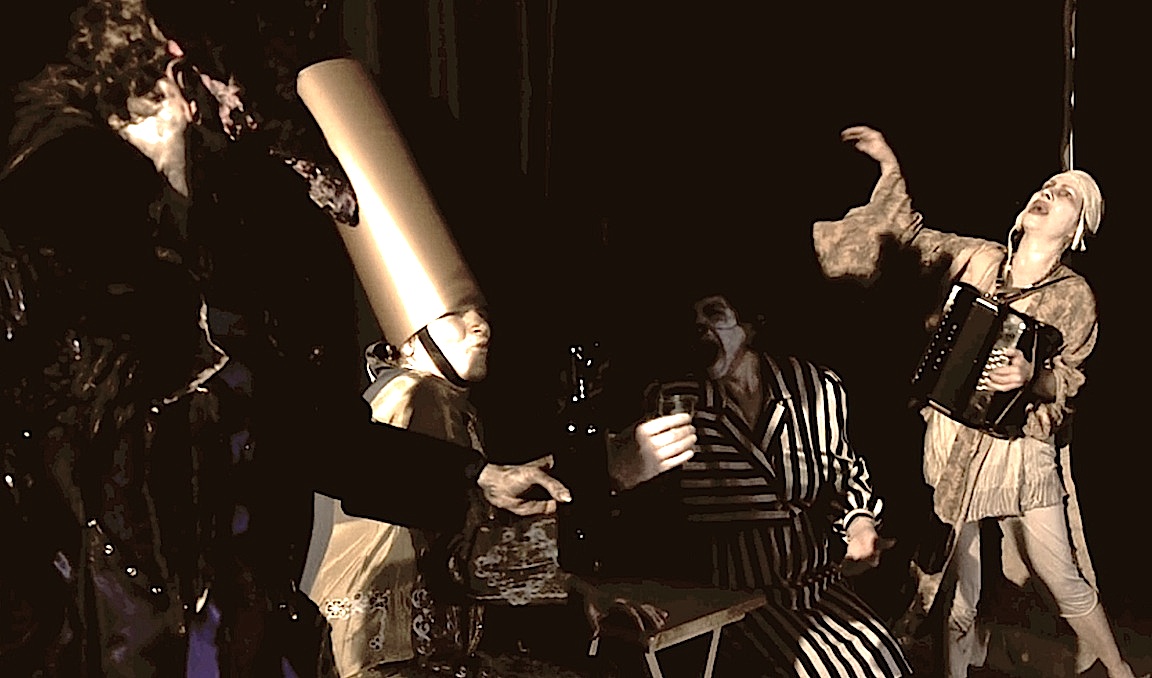 ParaTheatrical ReSearch; "A Turbulence of Muses" (Portland OR, Dec. 2016)

Where does ParaTheatrical ReSearch go from here?

In early October of 2015, after twenty productive years in Berkeley California, we (Antero and Sylvi Alli) relocated to Portland Oregon to advance our previous non-performance paratheatrical processes towards public intermedia performance rituals. Our first production, "A Turbulence of Muses" (text by Arthur Rimbaud), a Symbolist Ritual premiered December 2-4, 2016. Our next production, "Bardoville" (text by C. Bukowski; vocal creations by E.V.E., Sylvi, musical director), an Intermedia Performance Ritual, premiered May 12-14, 2017 (to critical acclaim from Oregon ArtsWatch). Our following production, "Soror Mystica" premiered December 1-3, 2017 (also to critical acclaim from Oregon ArtsWatch). Our next paratheatre production, "Fallen Monsters" (text by William Blake) premiered May 11-13, 2018. Our most recent and final work, "Escape from Chapel Perilous" premiered Nov 29-Dec 2, 2018. All five productions were staged at PerformanceWorks Northwest, PDX. In the fall of 2019, after 42 years of ParaTheatrical ReSearch, I decided to cease presenting all group work to the public. In 2020, I wrote State of Emergence: Experiments in Group Ritual Dynamics (Original Falcon press), a book distilling the principle methods and philosophy of this work. 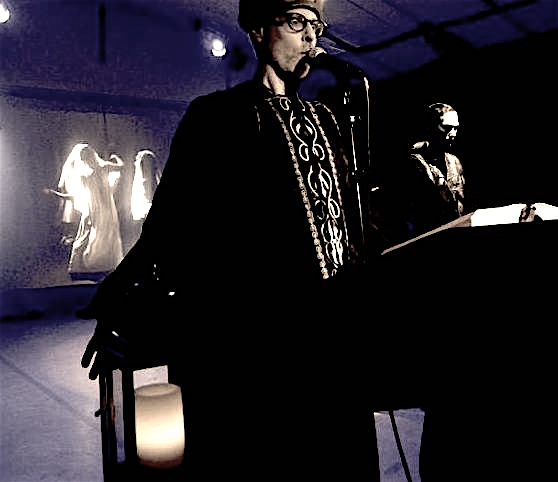 How is craft defined and developed in this paratheatre medium?

The development of craft in this paratheatre medium occurs over time with consistent application in 3 areas of work: identification, service, and sustaining care. All three areas are intimately linked with no final graduations or arrivals; all three overlap and contain components of each other.

IDENTIFICATION
The first stage starts with cultivating enough internal receptivity -- via No-Form practice -- to detect, engage and merge with energy sources in the body itself. Identification starts with a conscious choice to surrender to whatever source we are accessing in full-bodied immersive experience. The results can be chaotic, convulsive, ecstatic, and melodramatic without communicating anything beyond the catharsis of self-expression.

SERVICE
The second stage involves a shift away from merging, with whatever source we have identified with, towards serving its innate directives. This shift clarifies the forces in their innate patterns of motion, distinct characteristics, and rhythms -- resulting in more economy of movement and expression of whatever internal sources are engaged and identified with.

Click this for more on Advancing the Craft of Paratheatre 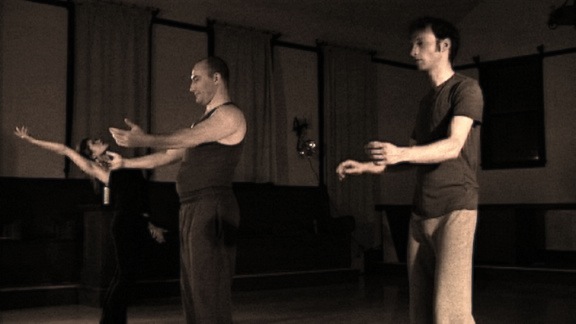 
What groups or individuals are currently active in paratheatre?

Currently, there are numerous offshoots and hybrids of Grotowski-informed work (those who have worked personally with Grotowski and Thomas Richards) and Grotowski-inspired work by groups and individuals all over the world. Listed below are some groups and their directors of paratheatre and paratheatre-related projects in the U.S.A.:

Additional groups in related fields, in and outside the U.S.A. listed at:
ParaTheatrical ReSearch Links

What books on paratheatre do you recommend? 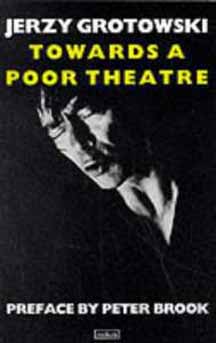 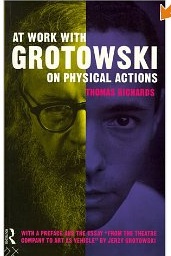 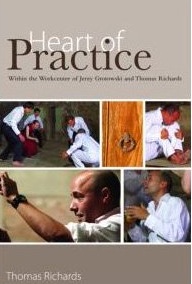 click above images for product information and book excerpts

Paratheatre-related articles
by Antero and others